We went to the Abbots Bromley Horn Dance today (10/9/12) and joined the crowds at Blithfield Hall for the first time. It made a very impressive backdrop to the dance, although compared to watching in the village it seemed like it was all over quickly. My favourite spot to watch from is Rugeley Turn – you can get quite close to the dancers and then follow them into the village and up a farm drive where they dance on some lucky person’s lawn! [UPDATED 2/9/14: Having watched from Blithfield Hall for the past two years, I think that’s now become my preferred spot – especially with a lively toddler in tow!]

It seems like a good opportunity to post a feature of mine that originally appeared in Staffordshire County Magazine (no longer produced) in June 2008, along with some photographs from today’s dance. Please contact me if you would like to use any of the words or photographs. 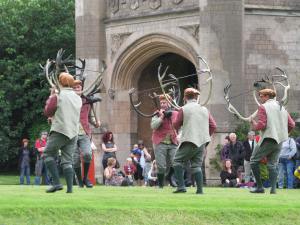 For 364 days a year six sets of reindeer antlers are kept in the Hurst Chapel of St Nicholas’s Church in Abbots Bromley. But on the first Monday after the first Sunday after the fourth of September the antlers are brought out for a day-long celebration that is one of the oldest traditions in Britain. Hannah Hiles finds out more.

The Abbots Bromley Horn Dance – which this year [2008] falls on September 8th – draws visitors from around the world to this attractive 13th century village between Uttoxeter and Burton upon Trent.

While the first recorded reference to the dance is in Robert Plot’s Natural History of Staffordshire, written in 1686, it is said that it was first performed at the Barthelmy Fair to celebrate St Bartholomew’s Day in August 1226. However, whatever the origins of the dance itself, one set of antlers was found to date from the 11th century when carbon-dated during repairs in the 1970s.

The dance consists of 12 dancers, six carrying reindeer antlers weighing between 16lbs and 25lbs, accompanied by the hobby horse, a jester, Maid Marian, a boy carrying a bow and arrow, a musician playing an accordian and a boy playing the triangle keeping the beat of the music for the dancers.

After collecting the horns from the church at 8am, the dancers perform at locations throughout the village and its surrounding farms and pubs – although never leaving the parish – until the horns are returned to the church at around 8pm. 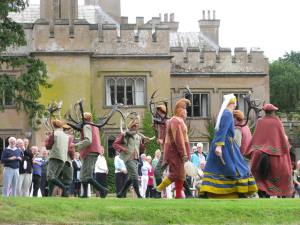 The leader of the dance, Tony Fowell, has been involved with the tradition since his first appearance as a triangle player at the age of seven or eight.

“I don’t like to think too much about when I started dancing,” he says. “It seems like I have been doing it forever sometimes, but it would have been 1957 or 1958. My grandfather was the dance leader at the time, and my father was also a dancer. The dance is not only a historical tradition, but also a proud family tradition, so I suppose it was a natural thing to be brought in as a position became available.

“The tradition is important because it is unique. It is, to my knowledge, the only one of its kind to have survived, anywhere in the world. Even the two world wars, which probably caused the demise of many other British traditions, couldn’t stop it. In my own view, the dance has earned its own place in our history. It’s a living, breathing thing that goes back hundreds of years and there is nothing else like it.”

Tony’s nephew Michael, who created the dance’s website [UPDATED 2/9/14: link removed as no longer working] last year aged just 13, is also very aware of the power of the tradition – and made his debut at the age of seven with the bow and arrow.

“My mother used to push me around in my pram while my father, uncles and grandad all danced,” he says. “I remember saying the first time I danced that ‘I have waited all my life for this’, which gave my family a good laugh as I was only seven years old. It means a lot to my family and it makes me very proud.” 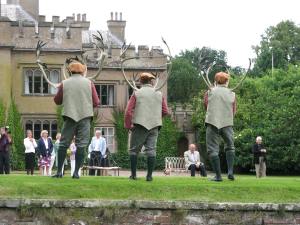 While the origins of the dance have been lost in the mists of time, Tony and Michael favour the theory that it was a fertility ritual designed to bless the farms with good crops each year. But, for the dancers as well as the audience, the mystery is part of the appeal.

“Some historians tell us that it is likely to be an ancient fertility ritual with pagan roots,” says Tony. “I like that theory. It sort of fits in with the feel of the dance, especially when performed at dusk, or night. But, I suppose it could just as easily been started by a bunch of ancient local jokers at the village fair. The truth is, we don’t know. I believe that it’s the ‘don’t know’ that’s so intriguing. That’s what gets people’s interest. Each time you think you have an answer, it simply raises another question.

“We discovered that at least one of the horns is over a thousand years old. So, as reindeer have been extinct in this country for longer than that, where did they come from? And so it goes. How, and why, the dance started is interesting, but the important fact is the dance was, and still is, danced.” 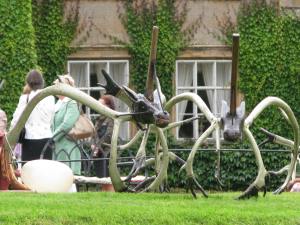 You can find more information about the dance, as well as a schedule of the day, at http://www.abbotsbromley.com/horn_dance. 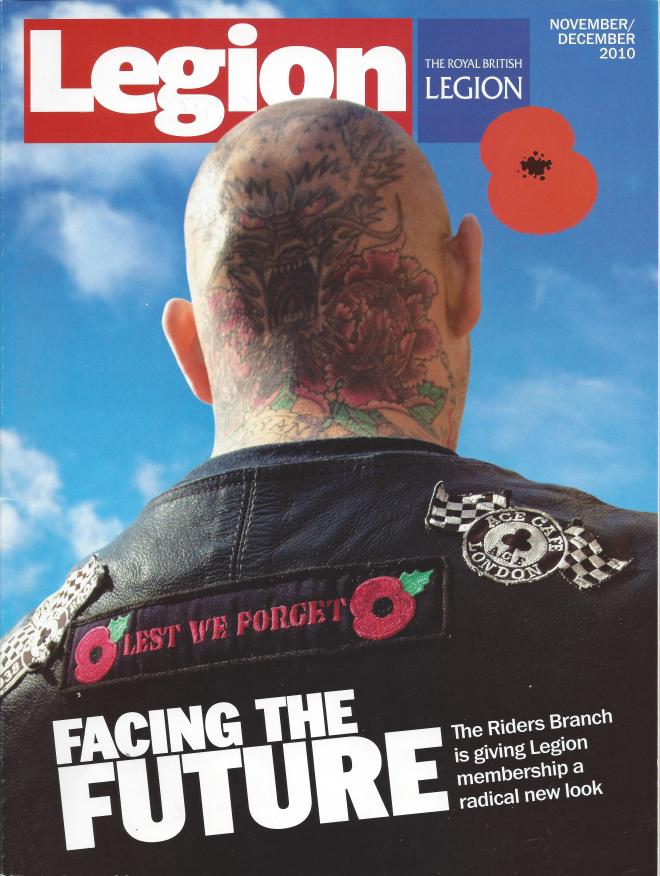 I was interviewed by Legion magazine (the Royal British Legion’s membership publication) about Life Stories, the project I worked on with the National Memorial Arboretum.

The piece appeared in the November/ December 2010 edition. It also included summaries of two of the stories featured in the book.

View a PDF of the article here. 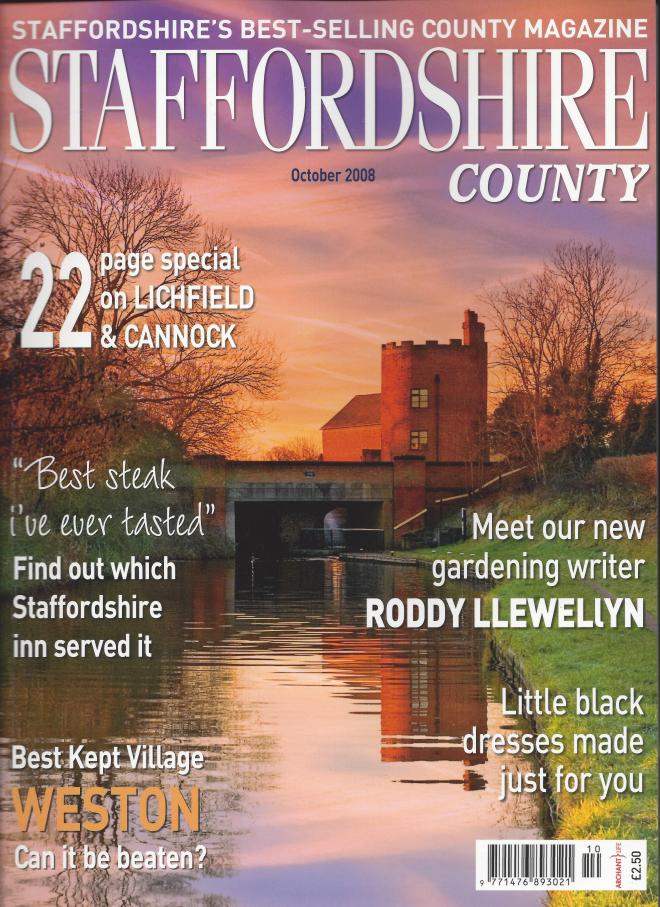 I wrote about the fascinating Samuel Johnson Birthplace Museum as part of the October 2008 Cannock and Lichfield county special for Staffordshire County Magazine.

“I lately took my friend Boswell and showed him genuine civilised life in an English provincial town. I turned him loose at Lichfield.”

View a PDF of my feature about the Samuel Johnson Birthplace Museum here.

I wrote a pull-out about Cannock and Lichfield for the October 2008 edition of Staffordshire County Magazine.

This included a range of features, listings and a guide to the towns.

View a PDF of the Cannock and Lichfield guide, Beauty and Brains, here.

I wrote about my love of the Potteries Museum and Art Gallery in Hanley as part of the August 2008 Newcastle-under-Lyme and Stoke-on-Trent county special for Staffordshire County Magazine.

View a PDF of my feature about the Potteries Museum and Art Gallery, Treasured Memories, here.

This article also appears in full on my website here.