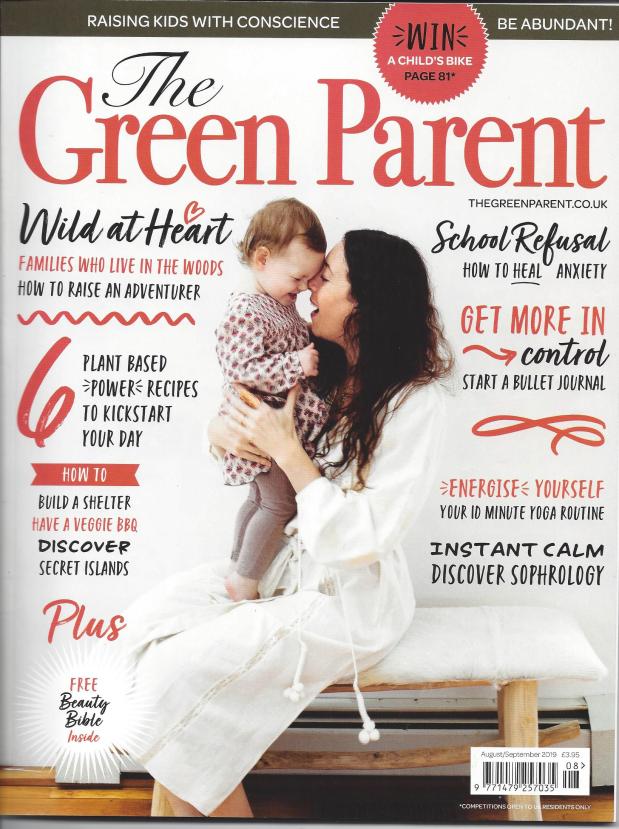 The August/ September edition of The Green Parent magazine includes the latest in my series of interviews with parenting authors and experts.

I spoke to breastfeeding expert Emma Pickett about The Breast Book, which aims to help demystify breasts for nine- to 14-year-old girls and challenge some of the messages ingrained in society.

You can read the feature here (PDF).

Don’t forget, you can get £5 off a subscription to The Green Parent when you use my code HHILES. More details here. 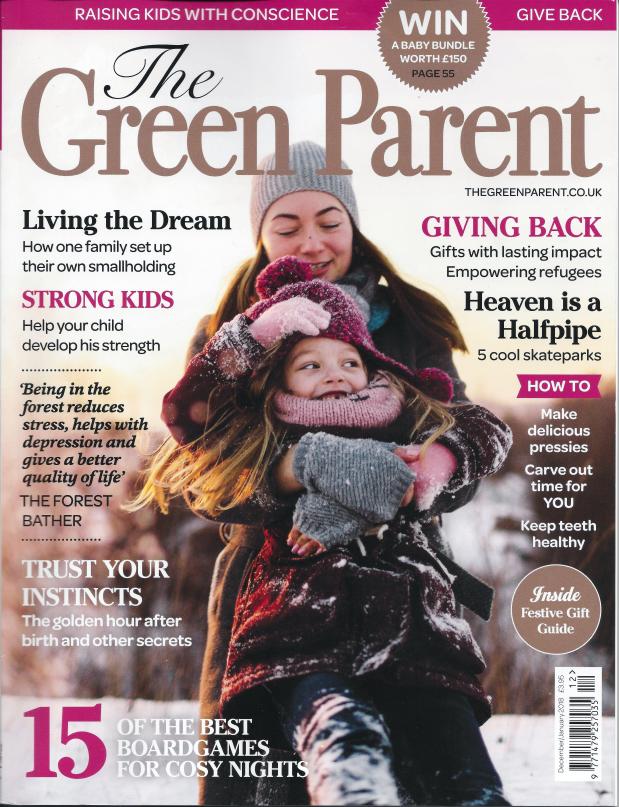 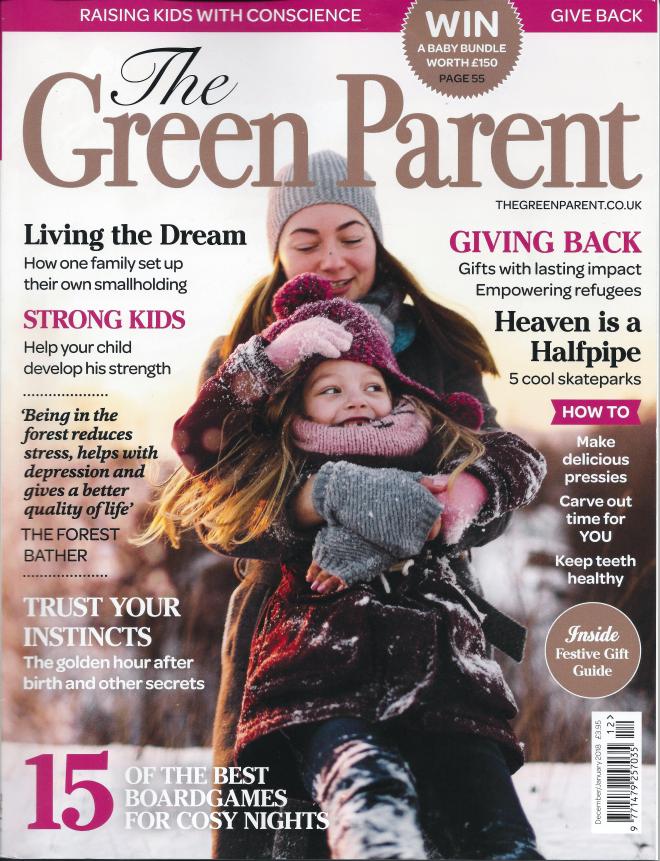 The December / January edition of The Green Parent magazine includes the latest in my series of interviews with parenting authors and experts.

I spoke to Dr Amy Brown, an Associate Professor in the Department of Public Health, Policy and Social Sciences at Swansea University, about her book Breastfeeding Uncovered: Who really decides how we feed our babies? and how society is undermining   women’s confidence in their ability to breastfeed.

I can’t understand why we happily drink cow’s milk, which comes from another species, but are so disgusted by breastfeeding. People sit in coffee shops pouring cow’s milk into their drinks while criticising someone for breastfeeding at the next table. It’s messed up.

You can read the feature here (PDF).

Don’t forget, you can get £5 off a subscription to The Green Parent when you use my code HHILES. More details here.

The December / January edition of The Green Parent includes the latest in my series of interviews with parenting experts.

I spoke to Ellie Stoneley, author of award-winning children’s picture book Milky Moments, about the importance of encouraging and normalising breastfeeding.

Breastfeeding is normal and it’s a normal part of family life that doesn’t need to be locked away or done in private. Just feed your child as and when they want it. […] It’s a very special time, and for many families, a very treasured part of childhood.

You can view a PDF of the feature here. 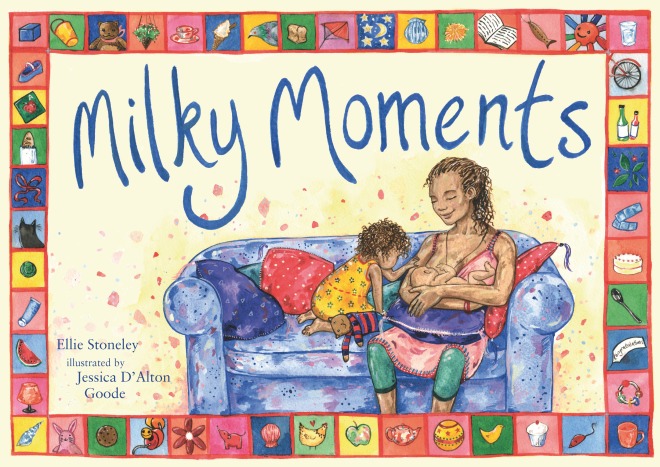 I’m taking the H2Only Challenge with three friends to raise money for the RNLI. This means we will drink only water for 10 days from 5pm on Tuesday, September 13th, until 5pm on Friday, September 23rd. No coffee, tea, squash, pop, wine – even fizzy water is banned! It has to be just plain water, “H2Only”. You can sponsor me, Beckie, Karen and Keith at https://www.justgiving.com/fundraising/createh2only.

Some decaffeinated goodies in my drinks cupboard

I’m still not feeling great but no one wants to hear me whinge on again about my sinuses, so I thought I’d take a look at a question that a friend asked me yesterday.

She has been following our H2Only challenge with interest (and has sponsored us as well – thank you!) and was curious about whether my usual caffeine intake affected my breastfeeding.

I love any excuse to do a bit of research (I am a Questioner, after all!) so I enjoyed thinking about my friend’s question. I’ve definitely found that this challenge prompts people to look at themselves and work out what works and what doesn’t. The H2Onlies Facebook group is full of people who are planning to make permanent changes once 5pm tomorrow rolls around.

I probably hadn’t made it clear enough that I generally don’t drink a lot of caffeine. Well, not too much. That’s one reason I’m sorry that I never got to feel if I got any withdrawal symptoms during this challenge (“No moaning about your sinuses today!” – Ed) – I would have like to know if not much was actually too much.

I normally start the day with a mug of “proper” coffee (usually what’s left in the coffee maker by my shift-working husband, who has often gone to work by the time I wake up) and then for the rest of the day it’s good old Sainsbury’s decaf all the way. We switched to decaf teabags when I was pregnant with my five-year-old and never went back, and I will usually make decaf coffee during the day. I generally drink normal coffee when I’m out and about. I do love a tall Starbucks fresh filter coffee.

My (formerly) beloved Coke was a chemical-sugar-caffeine-infused guilty pleasure, but that was an occasional treat rather than an everyday drink. We switched to Coke Zero a while back to try to be healthier but I didn’t like it much so that tended to be for my husband. He’s developed a taste for sugar-free squash (which I also don’t like) so we’ll probably steer clear of Coke from now on. As I mentioned before, it’s easier for me to abstain completely than just have a little bit. And yes mum, I do know how bad Coke is for you.

I’ve got various yummy herbal teas in my cupboard, including some chocolate and vanilla rooibos teas that a friend gave me in a new mum care package when my youngest was born. And then there’s chai, lemon and ginger, peppermint, green tea, the list goes on. I can’t wait to try some of these again after tomorrow. And I’ve asked my husband to pick up a big bottle of sparkling water on his way home from work from tomorrow.

I love a hot milk and honey in the evening before bed (rock and roll!) and I only drink alcohol once in a blue moon.

Which brings me to breastfeeding! Note, I am not a trained peer supporter (although I would LOVE to be) or anything formal, just a mum who has breastfed two children and believes in encouraging women to trust their bodies and give it a try.

Caffeine does get into your bloodstream, and then about one per cent of that gets into your breastmilk. The NHS website suggests that pregnant and breastfeeding women should stick to less than 300mg per day, and gives a few examples of what that means in practice.

Babycentre says: “NHS guidance is to have caffeinated drinks occasionally rather than every day while your baby is young. In the US, women who are breastfeeding are recommended to have no more than about 200mg of caffeine a day. That’s about two mugs of tea, or two mugs of instant coffee, or one mug of filter coffee, a day.”

The superb KellyMom website agrees that “most breastfeeding mothers can drink caffeine in moderation” and provides some interesting tables about the caffeine content in various (American) foods and drink.

A breast-fed baby whose mother consumes too much caffeine might be particularly wakeful and restless. KellyMom quotes from The Breastfeeding Answer Book: “A baby who is being overstimulated by caffeine is a wide-eyed, active, alert baby who doesn’t sleep for long. He may also be unusually fussy” and, interestingly in the H2Only context, says “it may take a few days to a week after mom eliminates caffeine for baby to become less fussy”.

My 10-month-old is generally a very laid back little man who doesn’t show any signs of caffeine stimulation, and hasn’t been any different during this challenge, so I don’t think I need to be concerned – unless I go absolutely crazy on the caffeine at the end of this challenge! (Not likely – it’s a sad truth that I am boringly sensible).

Thank you, my friend, for your question! I really enjoyed looking into it – and hope it might be useful to others too. It sure beats complaining about my sinuses!