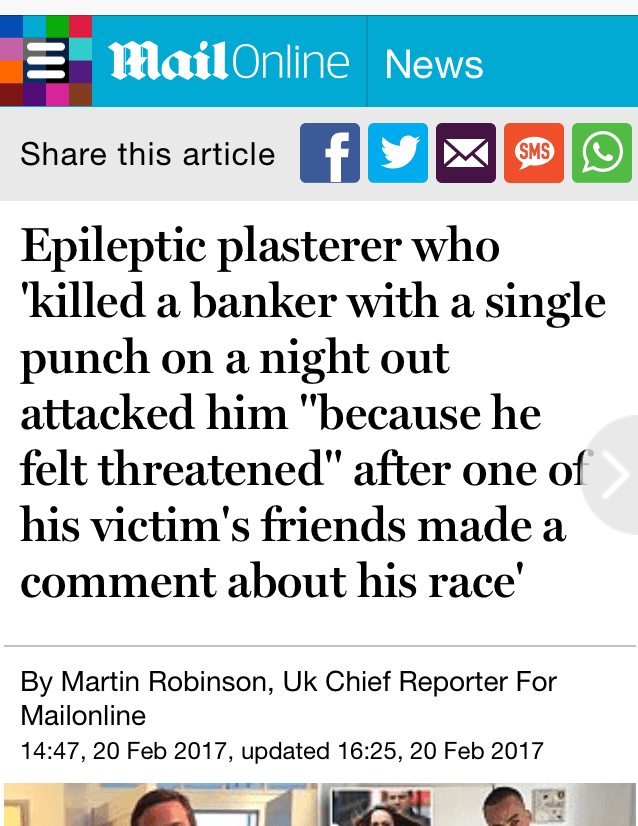 The Daily Mail has done it again. Yes, I realise that I should never be surprised by anything that appears in the Daily Fail, but I can’t help but be shocked that yet again they have equated epilepsy with violent behaviour.

Take this story which appeared on the website today: Epileptic plasterer who ‘killed a banker with a single punch on a night out attacked him “because he felt threatened” after one of his victim’s friends made a comment about his race

Did he punch the man while his limbs were jerking during a seizure? No. Was he dazed and confused after coming round from a period of unconsciousness? No. Does the fact that he has epilepsy have anything to do with his violent and ultimately fatal outburst? No.

He left his job after being diagnosed with epilepsy. That’s it.

He told jurors he worked as a plasterer for about four years after leaving school, but quit work after he was diagnosed with epilepsy following a seizure.

‘I haven’t been able to work. I stay at home pretty much,’ he said.

He’s 31 now, so that’s a long time not to work. Many – or indeed probably most – people with epilepsy work and lead normal, fulfilling lives. Normal, fulfilling lives which don’t involve punching people and causing their death. Epilepsy had nothing, and I repeat NOTHING, to do with that violent rage.

The Daily Mail has form for this. Back in October 2012 I was so incensed with a very similar piece – that gem was Epileptic man stabbed his noisy neighbour to death with a fish knife in row over eviction – that I wrote and complained to the paper. This is what I wrote. I didn’t get a response, of course. The chap in the piece had mental health problems which clearly contributed to the tragic outcome. Again, his epilepsy had nothing to do with it but was just a peg.

Woo, look at those crazy epileptics! They are mentally ill! Maybe they’re actually possessed by demons? We’re all going to catch it! They’re going to kill us all!

As I wrote in my previous complaint:

I know I shouldn’t give the Daily Mail the oxygen of publicity but this really grinds my gears.

This kind of unhelpful media representation only serves to reinforce the stigma and prejudice which sadly still exist. No one needs to be ashamed of having epilepsy.

As a person with epilepsy, one of my major bugbears is the way the condition is treated in the media, especially the tendency to equate it with mental illness.

A recent article in the Daily Mail Epileptic man stabbed his noisy neighbour to death with a fish knife in row over  eviction made my blood boil so much that I just had to send the following email of complaint to their letters editor:

I was shocked and saddened to read your report of the man who killed his neighbour over a dispute about noise.

There are two main areas of concern with Emily Allen’s report.

The term “epileptic” is used in the headline and copy as almost a justification for this man’s murderous behaviour, particularly when placed alongside his mental health problems. In fact, his having epilepsy was of no relevance to the story whatsoever.

Epilepsy is not synonymous with mental health problems – it is a neurological condition caused by abnormal electrical impulses in the brain. These are not caused by the chemical imbalances which can be found in mental health conditions.

Relating this man’s violent crime to his epilepsy only serves to reinforce ill-informed prejudices and the unnecessary stigma which people with epilepsy incredibly still face. If he had had asthma, would your headline have been “Asthmatic man stabbed noisy neighbour”?

I was also disappointed by your use of the label “epileptic”. As a person with epilepsy, I refuse to be defined by the condition. It’s just a very small part of who I am – I am not “an epileptic”.

In the same way that you would surely not refer to a “Downs Syndrome baby” in this day and age, it would be fantastic if people with epilepsy could be granted the same respect.

I didn’t get a reply, but then I didn’t really expect to. I just had to do something to let them know that what they had written was unacceptable. If it makes them think twice in future, all the better.

Sending that email also prompted me to take some more positive action by signing up as a media volunteer with Epilepsy Action. It would be an honour to be involved in something which would encourage and reassure women with epilepsy that they can go on to have the families they dream of.