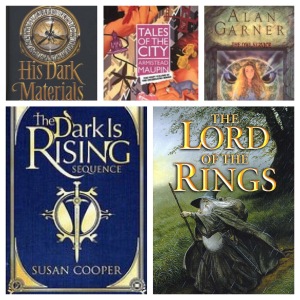 Am I allowed to use shouty capitals in the title of this post? I think so, because choosing favourite books is always a minefield. Favourites often change with your mood, the season, the time of day and so on, but these books, these are the ones that have stood the test of time with me. The ones that have influenced me, even changed my life.

There are a few runners up at the end of the list, but these 10 are the ones that truly make my heart sing.

And no, I don’t care that it’s cheating to include series or trilogies as one entry. It’s my list, my rules.

So here we go, in no particular order:

High Fidelity by Nick Hornby – this book knocked my socks off when I first read it because it was just so me. If I remember rightly I more or less read it in one sitting. Despite being in my mid-teens at the time, I really saw myself in Rob, the thirty-something record shop owning protagonist. I’m not saying this is a good thing though. I talked about this book in my Oxford interview and have read it many, many times, although not for a while. I wonder what I would think of it now that I am in my late 30s? I expect I would still love it. (And the John Cusack film? I quite like it.)

Yes Man by Danny Wallace – I’m not 100 per cent sure if this book belongs in this list but it earns its place because it literally changed my life. Influenced by Danny’s decision to say yes to everything, I picked “say yes more” as my New Year’s resolution for 2006. I was invited out for a friend’s birthday celebration a few weeks later, and although I had been ill and didn’t feel like going, I decided that I couldn’t break my resolution as early as January. So I said yes – and ended up meeting the man who would become my husband. And the rest is history.

Simplicity Parenting by Kim John Payne – this has been hugely influential in how I bring up my two children. I discovered it when I was pregnant with my first son, and I like to re-read it often as a refresher. I was honoured that Kim John Payne was the first interviewee for my series of features in The Green Parent magazine.

The Happiness Project by Gretchen Rubin – basically I would like to be Gretchen Rubin when I grow up. Until then, I just ask myself “What would Gretchen do?” She is smart and witty and a delight to read. And her podcast, Happier, is a great listen too.

The Dark is Rising sequence by Susan Cooper – Welsh myths, Arthurian legends and much, much more. The five books – Over Sea, Under Stone; The Dark is Rising; Greenwitch; The Grey King; and Silver on the Tree – are all quite different but fit together beautifully. I have a wonderful memory of listening to the audiobook of The Grey King while driving around the Cadair Idris area of Wales, where the book is set. (If you’ve seen the film version of The Dark is Rising, don’t let it put you off!)

The Wind Eye by Robert Westall – I remember buying this at a school book fair and being totally captivated and creeped out. I read it again recently and it still completely gave me the willies. That bit where Beth sees a monk waving to her from the garden – oh, it gives me goose pimples just thinking about it!

The Owl Service by Alan Garner – another enduringly creepy children’s classic and more Welsh myths. She wants to be flowers, but you make her owls. You must not complain, then, if she goes hunting…..

The Lord of the Rings by JRR Tolkien – is it complete heresy to say I prefer the films? Even so, there is something so special about this work that keeps me coming back to it. Yes, it’s overly wordy in parts (many parts) but the world Tolkien built is so perfectly imagined. It’s a great story with so many layers.

The Tales of the City series by Armistead Maupin – I discovered this series as an impressionable teenager thanks to the television series – Mary Ann will always be Laura Linney to me! – and fell completely in love with the characters. As soon as I finished one volume I would be straight down to WH Smith the following weekend to spend my pocket money on the next one. We have completely lost that delicious sense of anticipation in the “buy it right now” Amazon world, haven’t we? There were six novels at that point, and Armistead Maupin has since written three more. I’m sorry, Armistead, but I’m not keen on the final three. Let’s just pretend it finishes at Sure of You instead.

His Dark Materials by Philip Pullman – this is another perfectly crafted and imagined work of art. I loved the parallel universes which were so similar and yet so different to our own. I especially loved the Oxford setting and remember actually yelping out loud with glee when Lyra ran down Norham Gardens. I can’t wait to read the latest instalment when it comes out later this year.

And here are a few runners up:

The Chronicles of Narnia by CS Lewis

On Writing by Stephen King

The Anne of Green Gables series by LM Montgomery

What are your favourite books?